Delivery costs offered!
In Switzerland, we know how to make watches. We also know how to stop time...
Close 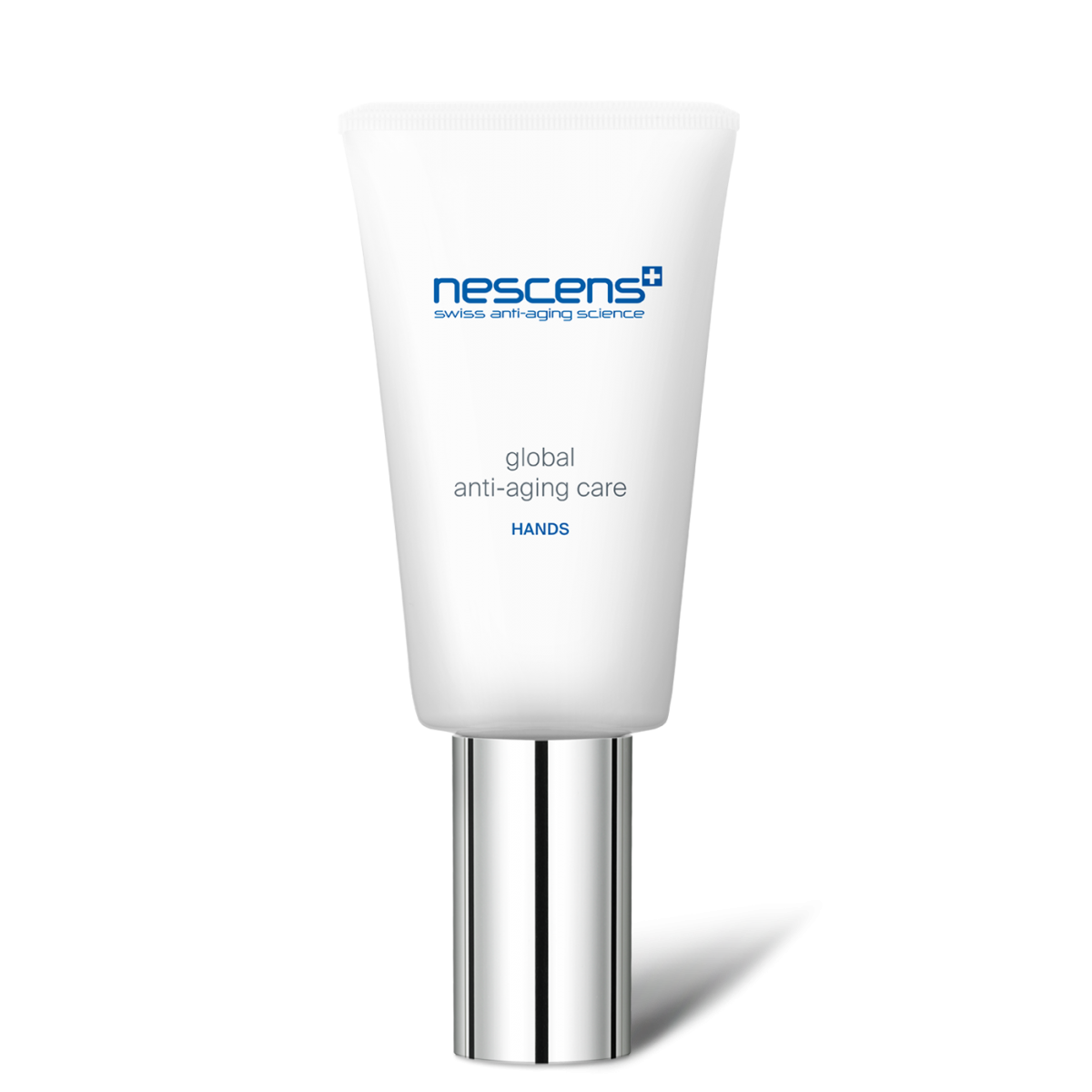 Nescens global anti-aging care - hands is a highly effective, all-in-one product which prevents and corrects the appearance of age-related alterations on the overexposed tissues of the hands; dehydration, dryness, roughness, micro-folds, dark spots, loss of density.

Using its in-house technology, Nescens has developed a unique cosmeceutical formula with an ultra-high concentration of active ingredients, which quickly absorbs into the skin to leave a non-greasy-feel.

This targeted anti-aging product is based on the findings from top biomedical research into skin aging. Together, the active ingredients reinforce, redensify and strengthen the skin, making hands look and feel younger.

In the presence of dark spots caused by chronological or photo-induced aging, apply Nescens Dark Spot correcting serum directly to the areas of interest.

Phytosterols (ecdysterone): powerful cell-production booster with a high concentration of ecdysterone from tropical fern extracts. It helps slow the aging process and recreate the volume, structure and profile of younger skin. The booster strengthens the connection between the dermis and the epidermis, making skin firmer and more elastic. The epidermis becomes more stratified (more quickly), recreating the density of younger skin and the cohesion of the stratum corneum is restored so that it can offer the best possible protective barrier.

Niacinamide (vitamin B3): multifunctional vitamin. It strengthens the skin by increasing the resistance of the outer layer and also helps keep skin hydrated. It visibly improves the appearance of older skin by promoting targeted collagen synthesis. It also helps lighten the skin by counteracting melanosome transfer to keratinocytes which cause skin pigmentation. In vivo studies have shown that niacinamide significantly reduces dark spots and helps even out skin tonet.

Opuntia ficus-indica stem extract (concentrated extract from the prickly pear cactus or nopal cactus): rich in amino acids, flavones, vitamins, anti-oxidants and polysaccharides. It protects the skin against environmental factors (blocks the release of stress markers from sensory nerve cells in the skin, soothing irritated skin) and provides intense and long-lasting hydration (exceptional hydrating properties thanks to high levels of moisturising agents). Clinical studies carried out on both men and women have shown that concentrated Nopal extract performed exceptionally in soothing and firming the skin. It also proved to have a significant moisturising effect, even in products designed to be washed off. Concentrated Nopal extract also includes piscidic acid, which is a powerful iron chelating agent, bonding free Fe2+ and Fe3+ ions. In skin tissue, Fe2+ is normally bonded to ferritin, but UV rays can break these molecules down, releasing Fe ions. This may lead to the formation of hydroxyl radicals, which are a type of reactive oxygen species. By bonding free Fe2+ ions, piscidic acid prevents reactive oxygen species from forming.

Retinyl palmitate (Vitamine A): speeds up cell turnover in the epidermis and promotes a smooth, uniform appearance. It also helps improve skin firmness and prevent dryness.

Alpha arbutin: lightens the skin and promotes an even skin tone by inhibiting the enzyme tyrosinase which is needed for the biosynthesis of melanin in the skin.

Crocus chrysanthus bulb extract: boosts collagen and elastin production in the skin and stimulates natural skin growth factors (as confirmed in clinical trials based on two weeks' treatment). The extract rejuvenates the skin matrix by stimulating communication between skin cells, which improves the biomechanical properties of the skin (essential for tissue growth, regeneration and rejuvenation). Cell-to-cell communication – a new strategy for targeting the dermis. • Uses the communication network between keratinocytes, which are cells located in the outermost layer of the skin, and fibroblasts, which are located in deeper layers. • Causes keratinocytes to secrete growth factors, increasing collagen and elastin synthesis in the dermis by fibroblasts. As we get older, the process of communication between skin cells, which is relayed by growth factors, is reduced. This has a major effect on the extracellular matrix (or ECM), which is the network that forms the structure of the skin, leading to a decrease in skin firmness, elasticity and density. A series of tests showed that stimulating growth factor secretion in keratinocytes boosted collagen and elastin synthesis in the dermis. The effect this has on fibroblasts is comparable to the effect of TGF-β, a natural growth factor involved in ECM synthesis.

Clinical studies have confirmed the following result after as little as two weeks of treatment: significant increases in skin firmness • the amount of collagen and elastin in the skin both increased. Crocus chrysanthus bulb extract can therefore rejuvenate the skin matrix by working as a growth factor, preserving and enhancing the biomechanical properties of the skin.

Phytosphingosine: a biomimetic lipid identical to the one found naturally in the skin. It plays a key role in promoting the function of the skin barrier. It soothes damaged tissue by balancing the skin microflora.

Carnosine: anti-aging peptide. It prevents the cross-linking and hardening of collagen and elastin caused by the glycation process. Clinical studies have shown that this hydro-complex moisturising agent strengthens and soothes skin with immediate and long-lasting effects. 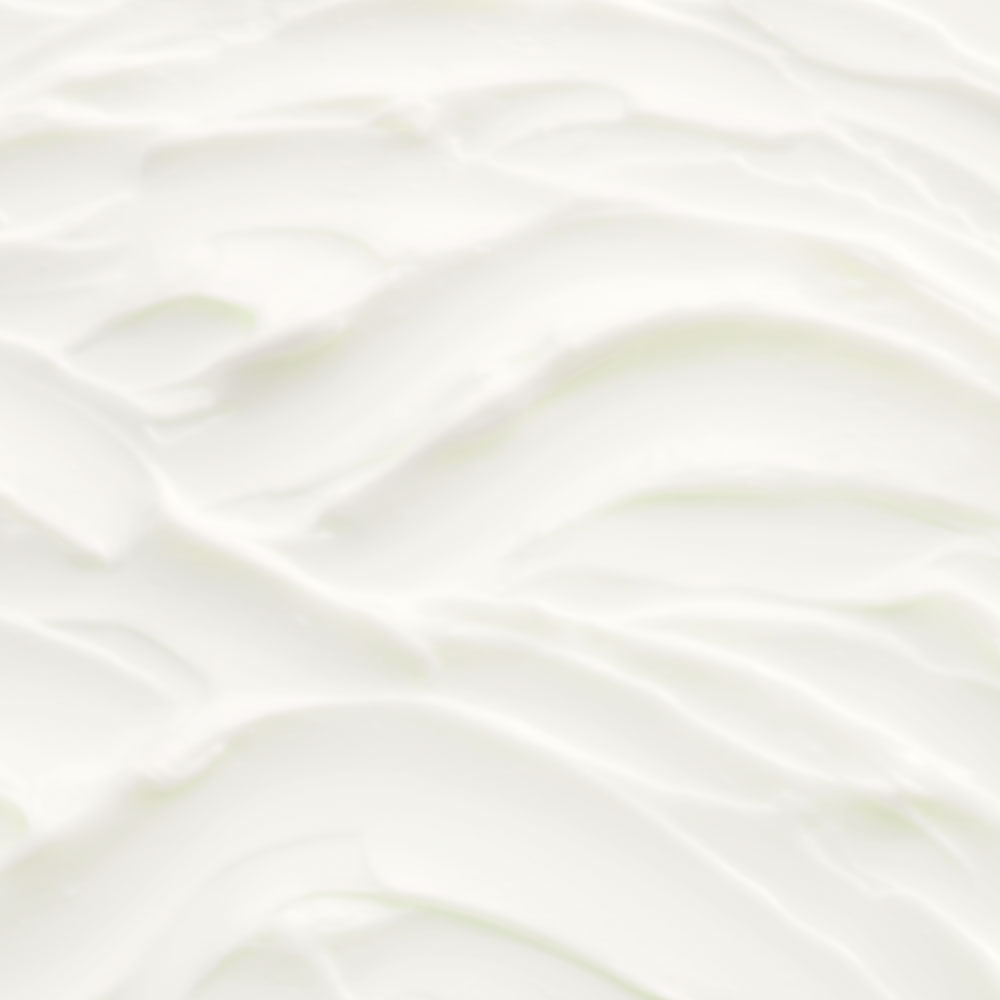 Massage the product into the skin tissue, from the wrists right up to the fingertips.

Reapply during the day after washing the hands. Finish off with light tapping motions to help the penetration of the cosmeceutical.